Birdwatching on the North Norfolk Coast 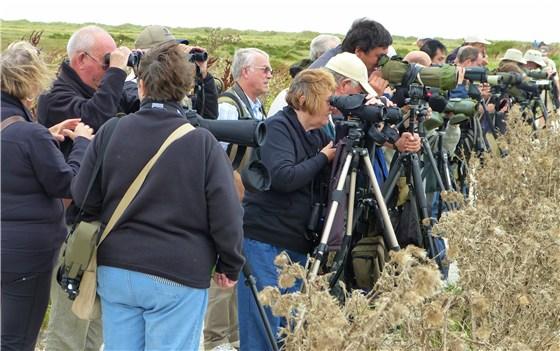 We still stand spellbound witnessing literally thousands of migratory pink-footed geese blacken the skies over Magazine Wood as they honk their way at dusk to their night time roost at Snettisham reserve.

Little wonder, many describe this corner of Norfolk as the bird watching capital of Britain. There’s plenty to see whatever the time of year – from Barn Owls to Kingfishers, Cetti’s Warbler to Bearded Tits. For many Norfolk is a birdwatchers’ favourite especially for novices with visitor centres and nature reserves, that help the beginner and inform the experienced.

Birdwatching in Spring If you come to Norfolk in April or May you’ll enjoy the peak months for spring bird migration. Listen to nightingales or watch the sky-dancing display of marsh harriers and nesting avocets on the North Norfolk coast. You may also spot the rare nesting stone curlews in the rabbit-nibbled heaths or Little Ringed Plover, Redshank, Lapwing and Sand Martins arriving at Pensthorpe.

Birdwatching in Summer Head for the coast to watch marsh harriers, bearded tits, avocets, terns and maybe a bittern. It’s also a good time to take a boat trip to see the seals or the various wildlife at RSPB Strumpshaw Fen as well as swallowtail butterflies and Norfolk Hawker dragonflies. At Pensthorpe (20 mins) and you will see Raptors, along with Kestrals and Sparrowhawks. Also, keep your eyes peeled for buzzards at Great Ryburgh (15 mins dt) and your ears open for nightjars.

Birdwatching in Autumn Autumn starts early in the birdwatching world. Even by July you’ll find the first returning waders, many still in their breeding plumage, appearing on the marshes. By August, the southbound waders will be at RSPB Titchwell (10 mins dt), NWT Cley and RSPB Snettisham (5 mins dt) and in early autumn you may delight in discovering a rare red backed shrike or barred warbler. A little later on you may be rewarded by spotting a yellow browed or Pallas’s warbler or even something rarer!

But with all this taking place along the coast and on the marshes, don’t forget that at inland reserves like Pensthorpe, it’s a good time to spot Woodpeckers, Grey partridge, the Kingfisher, Barn and Tawny Owls.

Birdwatching in Winter This is the season to visit if you’re a serious twitcher. Come in late October to see the arrival of flocks of winter thrushes from across the north sea and the return of the wild geese and swans.The Wash is England’s largest tidal estuary and one of the country’s most important winter feeding areas for waders and wildfowl.

The RSPB at Snettisham is a fantastic place to witness the spectacular movement of of wading birds pushed off their feeding grounds at high tide.

The Norfolk coast is a great place for waders and wintering birds of prey, including merlin, peregrine and hen harrier, and you can see them best at dusk at places such as RSPB Titchwell Marsh.

The Norfolk countryside is also blessed with migratory visitors. At the reserve at Pensthorpe, it’s a good time to see many native species of waterfowl including Golden Eye, Gadwell, Goosander, Shoveller and Pintail. It’s a great opportunity to see Europe’s smallest duck, the European Teal and you may even catch a glimpse of one of the UK’s most endangered owl, the Long Eared Owl, as they come together in Winter for communal roosts. Don’t forget to pack your binoculars!

A word from an expert

“Norfolk is rightly regarded by birdwatchers as the best county to visit in Britain to see birds. The real beauty of Norfolk is that there is a mouth-watering variety of bird species to admire, no matter what time of year you choose to come. From the spectacle of thousands of Geese in winter, the wonder of migrating species in spring and autumn to the array of breeding Waders and Warblers, you are guaranteed to see something special during your time in this very special county.”