Held in conjunction with Sheringham 1940s Weekend, the event celebrates the wartime efforts of allied forces and the remarkable resilience shown by those who dealt with the hardships on the home front. Expect the sights, sounds and style of the ’40s in the town of Holt.

The annual event saw north Norfolk head back in time with a special music appearance from Britain’s Got Talents D-Day Darlings and David Van Day, along with lots of events ranging from military vehicle parades to pigeon racing.

The weekend celebrates the wartime efforts of allied forces and the resilience shown by people who dealt with the hardships on the home front. The 2019 event  was hailed this year’s North Norfolk Railway 1940s weekend the ‘biggest and best yet’, after an estimated 20,000 people turned out to Sheringham and Holt to take part. 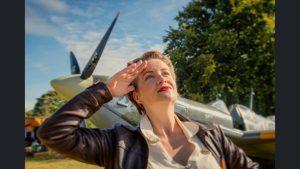 First held 21 years ago as a one-off event, the 1940s weekend has since grown beyond all expectation, attracting people from all over the country and spreading its wings to include local pubs, clubs, shops and churches.

Those taking part are ferried between the two towns by vintage buses and the railway’s steam and diesel trains, with the Poppy Line also laying on a host of attractions at its three north Norfolk stations.

Anna’s – A timeless place to stay on the Norfolk Coast.