Vikings once struck terror into the hearts of the inhabitants of our shores, but their return to north Norfolk will be very much welcomed. Plans have been drawn up to stage Sheringham’s Scira Viking Festival – which culminates in the burning of a model long ship. Provisional dates will see this event return in early April 2023.

In 2019 thousands of locals and visitors lined the promenade and clifftops to watch, as a flame torch-carrying Viking honour guard hailed the arrival of the wooden boat, which, after being carried across the shingle, was set alight on the sand in a spectacular finale. More than a hundred re-enactors from four Norfolk groups made their way to the seafront, where waiting crowds were entertained by a fire-breathers from Norwich-based troupe Unhinged Circus and music specially arranged for the event by festival organiser, former TV and film set designer Chris Neville. 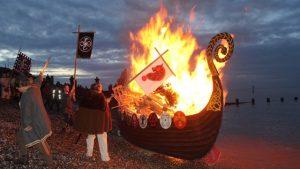 Spectators came from as far afield as Durham and Reading for the main festival day, which included battles on the beach and a living history village set up by Wuffa Saxon and Viking Re-enactment Society and featuring Viking cooking, crafts and weaponry, as well as have-a-go axe-throwing demonstrations and a working iron forge. There is a different format for 2022 with the Viking battles and the village put onto Beeston Common, and the parade will just be the Vikings with their flaming torches..